Evolution of the foundational IoT technologies

Evolution of the foundational IoT technologies

Various types of IoT applications have emerged, and the willingness of enterprises to utilize them is growing rapidly. According to Bradley, Barbier, and Handler(2013),the IoT will generate $14.4 trillion in value, the combination of increased revenues and lower costs will migrate among companies and industries from 2013 to 2022. From an industry perspective, four industries make up more than half of the $14.4 trillion in value. These leading four industries in terms of value at stake include manufacturing at 27%, retail trade at 11%, information services at 9%, and finance and insurance, also at 9%. Other industries such as wholesale, healthcare, and education lag behind in terms of value generation, with a range between 1% and 7%. Much of the value for manufacturers comes from greater agility and flexibility in factories, and from the ability to make the most of workers’ skills. Additionally, a large amount of the value for retailers comes from connected marketing and advertising. Geographic distributions of the value are heavily driven by each region’s relative economic growth rate and by the relative size of industry sector in each region. In the United States, $4.6 trillion of value is most prevalent in the services area. However, in China, $1.8 trillion of value is derived from rapid economic growth, mainly in the manufacturing sector.

Table below shows projected evolution of the foundational IoT technologies: network, software and algorithms, hardware, and data processing. The network is the backbone of the IoT. It refers to uniquely identifiable objects (things) and their virtual representations in an Internet-like structure. Network technology is moving to unobtrusive wire free communication technology that allows device to-device applications to be deployed more flexibly. Network technology is evolving toward a context aware autonomous network. Objects rely on software to communicate effectively with each other and to deliver enhanced functionality and connectivity. Software should be developed with the IoT’s inter operability, connectivity, privacy, and security requirements in mind. The focus of software development is shifting to user-oriented, distributed intelligence and machine-to-machine and machine-to-human collaboration. 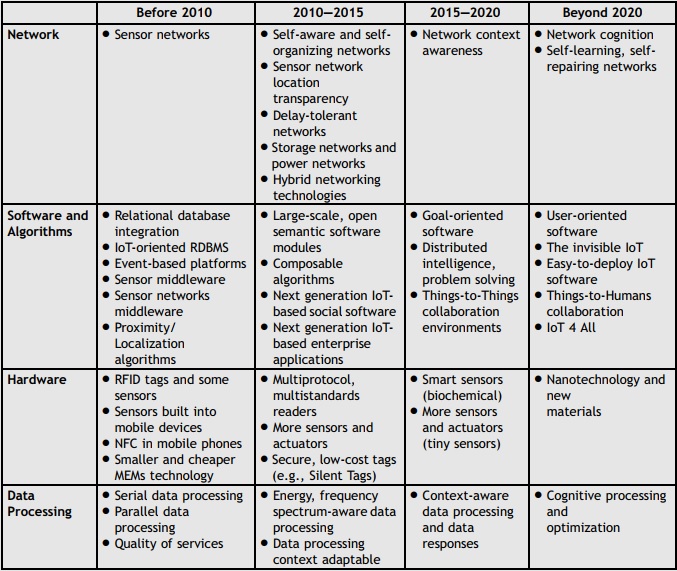 The news that Google is paying $3.2 billion in cash to buy Nest, a smart thermostat business, demonstrates the value of hardware in the IoT. Hardware is innovatively designed and robustly produced, driven by the consumed IoT devices which have myriad features, functionalities, and operating environments. While RFID tags and sensors have been the focus of hardware innovation, miniaturization of hardware and nanotechnology is leading the energy-efficient, low-power hardware evolution.

IoT devices generate enormous quantities of data that need to be aggregated and analyzed in real time to provide information regarding status, location, functionality, and environment of the devices. The traditional data processing method does not work well in the real-time streaming data process of the IoT environment. Since processing large quantities of IoT data in real time will increase workloads of data centers at an exponential rate, data processing will become more context-aware, optimized, and cognitive.

In the IoT environment, a large number of devices are connected with each other, and it is not feasible to process all the streaming data available to those devices. Context-aware data processing enables sensors and devices to use context-specific information such as location, temperature, and the availability of a certain device to decide what data to collect and interpret to provide relevant information to other devices or users. For example, context-aware data processing can deliver relevant information to a user by knowing the user’s current location (e.g., within a department store, a park, or a museum). Cognitive data processing integrates the human cognition process into IoT applications. Rather than being programmed to deal with every possible data-processing need, a cognitive data-processing application is trained using artificial intelligence algorithms to sense, predict, infer, and learn tasks and environments. For example, cognitive data processing uses image recognition techniques to understand the surrounding environment, processes data for a user, and utilizes feedback from the user to learn further. The optimization of data processing is critical to timely processing of the continuous stream of massive amounts of data. Technological advances in optimized data processing help make timely decisions in time-critical big data applications such as smart grids, environmental monitoring, and smart manufacturing.

To know more about Internet of Things (IoT), please click on the link below: 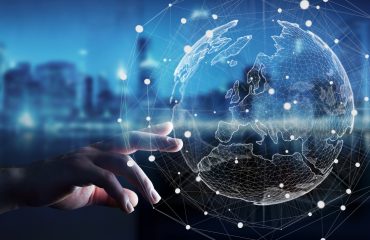 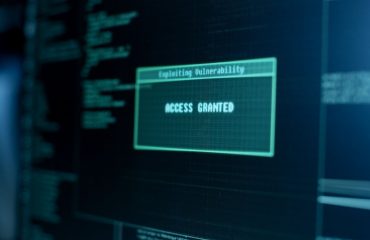