Zigbee network topology can be divided into three types. There are star topology, tree topology and peer-to-peer or mesh topology. Each topology will have different affect on how the messages are routed and which devices connect to which devices. 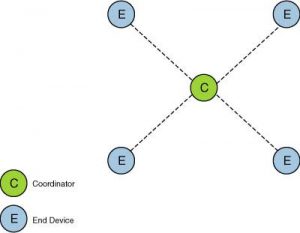 The second topology is tree topology. It consists of coordinator, few routers and end devices that act as a central node or root tree. The routers operate as a extension for the network coverage. The end nodes that connected to the parent (coordinators or routers) are called children. Only the end devices can communicate with the parent. The detriment of the tree topology is if one parent is disable, the children of the disable parent cannot communicate with other devices in the network even they are close to each other. The third and last topology is peer-to-peer or mesh topology. This topology consists of a coordinator, a few routers and an end devices. You can expand the network range by adding more devices into the network. If during the transmission one of the path is fail, the node will find the alternate path to reach to the destination therefore eliminating dead zones. Using this mesh topology it is easier for user to add or remove the device because they can communicate with any destination device in the network.

Feel free to contact E-SPIN for your Zigbee troubleshooting, as E-SPIN carry range of product in specific for wireless network performance application analysis, that include cover the Zigbee use case and context for whether your new Zigbee support device testing. 4 Trends in the Electronics Industry The 5 Keys to Educational Technology